This is my first race report in two years.  This was not intentional. In March 2017, I was supposed to run a half-marathon, which had been a postponement of a 2016 race.  I guess it wasn't meant to be.  In 2018, the day of the Firecracker run, I had my second child right on the morning of the race.  Leading up to that, I was willing to participate if I had been able to, but alas, the Year of the Dog medal will allude me until she's 12.

I registered for this race late because I wasn't 100% sure I was going to attempt to make a comeback, but somehow I pulled the trigger.  The kids would have normally come with us, but with an unusually cold (by Southern California standards... mid-30s) winter, we decided to drop them off instead.  We grabbed our bibs, and I walked over to the start line just as things were starting, very casual.  "The Ukrainian" did the 10k, so he waited while I ran, and after I was done, I collected post-race goodies and watched lion dancers.  I decided long ago that the 10k on those hills was too much for me, especially now that even 5k is not easy.

I feel like this course changes every time I run it, although it's always hilly for the first 2+ miles.  I also feel like it was less scenic than usual.  And I was definitely more out-of-shape than usual. Since I had Baby #2, I ran a handful of miles in the summer and then only started gearing up for this race a few weeks ago.  I'd run about 1.5 miles twice a week, then 2, and I did the full distance once and wanted to collapse.  Luckily, I live in a hilly-ish area, so I was able to keep running during the entire race, though there were many bottlenecks where I was shuffling along. I probably could have avoided this by coming to the start line earlier and wiggling toward the front, but I was just glad to have made it out there instead of stressing out over stuff like that. 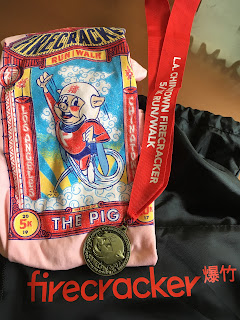 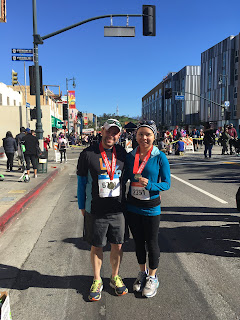 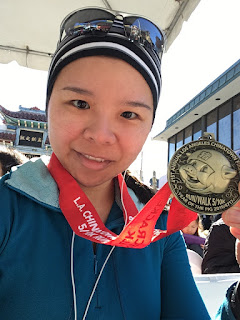 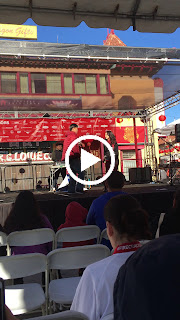 If you have been following for a while, this was my sixth Firecracker run, so I'm over halfway to my goal of collecting all 12 Firecracker Run medals.  This race is always so great -- casual, and great shirts!

Popular posts from this blog

May 12, 2016
Two posts in one week?  This must means that I am publishing these on an automatic schedule, since I'm finding it verrrry difficult to keep up lately.  Still, this post is going to be a fun one for me to write because it has to do with running!! I've mentioned this here before, but sometime after the new year, I saw that Mark Zuckerberg started a "year of running" in which he'd try to run at least 365 miles this year.  It took me more than halfway through the month to get on board with this, so I was running a lot of catch up and as of last week, I'm at 179 miles for the year, which I believe leaves me in good shape because it's still early May. Most of my miles were on the treadmill, but I'm doing more outside now, carving out paths around my hilly neighborhood.  The weather has mostly been amenable to running outdoors (for now!), though sometimes it calls for this little number from CozyPhones that "The Ukrainian" is modeling nicely si
2 comments
Read more

April 26, 2011
Ahhh, the joys of processed foods . My latest processing adventure involves detox.  For those people who listen to rap, Dr. Dre has been promising an album called Detox for about 10 years now.... I'm still waiting............................ *Ahem* Check out these Detox Macaroon recipe from Healthy Hoggin .  I've been making many versions of macaroons, but this is my favorite in terms of flavor. The unique thing about this (vegan) recipe is that it is 99% coconut. The first step is to pulverize some shredded coconut into a "coconut butter."  I loved seeing it transform!  It was quite tasty in this form! By the way, that is almond extract that you see above.  It's a lot stronger than vanilla extract and clear in color.  Coconut butter + more shredded coconut = macaroons! They are delicate and coconut-y without that throat-itching sensation of condensed milk that other macaroons offer.  If you're willing to put in some effort, definitely giv
4 comments
Read more

Ten Lessons Learned in the 2010s

December 16, 2019
"2010s" sounds very strange, by the way. As 2019 is coming to a close, I am both amazed at how quickly this year has gone by and also how much life has changed in the past decade.  Yes, I keep having to remind myself that we are, indeed, ending a decade ! I felt my spirit go back in time as I was re-reading my own  2009 "wrap-up post" .  I was in school and still living at home at the time, and I guess I envisioned that "...come next decade... I will be in my mid-thirties, possibly 'married with children."  And here we are.  I have two beautiful children who have wholly amazed me, and I have been constantly working on maturing myself into the mother and partner that I want to be. This is going to be one of those years where I won't be making lists of goals, because I'm very happy with most areas of my life and don't feel like I need to re-focus on them... for now.  As I just said, I am working on managing myself within my life's r
Post a Comment
Read more